Migration is the global megatrend of our days. Ever more children are born away from their parents' home countries, balancing between the languages of their mother, their father, their grandparents, and their peers. Their families may have been displaced by war or poverty, their parents may work for a global enterprise or an NGO. Or it may simply have been love, bringing together two people from different world regions who don't even speak the same language.

Whatever these reasons, our bilingual children's books want to bridge the language divides that cross more and more families, neighborhoods and kindergartens in the globalized world. They are meant to help families face the challenges and opportunities of living within different cultures and languages.

How it all started

The idea goes back to 2014. At that time, Anouk, my (Who is "me"? → Find out here...) youngest daughter had the chance to travel to Tanzania on a trip organized by her high school to visit their partner school in Morogoro and stay with local hosts. During preparations, the question of presents for the hosts was brought up. "It's always a good idea to bring bilingual picture books," one of the mothers said, "you can then look at the pictures together and get to know the other language."

There was in deed a beautiful book to be found (even in three languages), and everyone was happy ... - but at the same time an idea had come into my head: Like my daughter, there are people travelling to other countries every day, taking part in some exchange program or visiting the country as tourists. Others are working for a company or an NGO for a couple of months or years, and some are going to stay forever. And some of these people may be blessed with a spouse and children and find themselves within a family that speaks two or more languages - and that family is in need of exactly what our daughter had put into her travel luggage: bilingual picture books ...

That idea has now become reality: After "Sleep Tight, Little Wolf", which was published in more than 60 languages, two more multilingual picture books, "The Wild Swans" and "My Most Beautiful Dream" have been published. And more are being prepared ...

The formula on the napkin

It is a challenge in its own right to handle so many languages and feed them into individual books. Giving the option to buy any possible language combination is an outright mind-boggling task - which could only be made possible with heavy IT support.

For those who want to go into the details, I present the formula which my friend Martin Andler, a distinguished university professor in mathematics, marked down on a napkin, when I first talked to him about the project in a little restaurant on Boulevard Montparnasse in Paris. Apparently it can be used to determine the number of possible combinations: 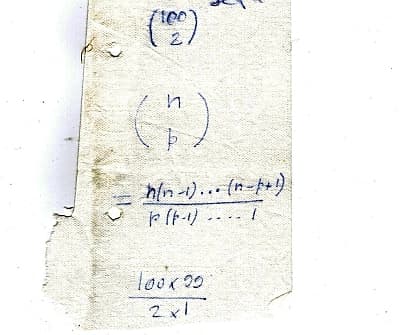 I must admit I still don't really understand the formula, but the take away message is: the 60 languages the "Little Wolf" has been translated into – combined with one another – make for 3540 possible books!

So how to handle such an amount of data, print files, book jackets, ISBN numbers etc.? That was the point in the project's history, → where the nerds came in ...

What we are especially proud of: our "Language Wizard"

There are many bilingual books, there are even bilingual children's books translated into more languages than our "Little Wolf". But what (to our knowledge) is unique to our project - a real world novelty, so to say: our "Language Wizard". It allows you to select, in a simple drop-down menu, the two languages in which you want to have the book, and you'll instantly have the book's presentation before your eyes - in both selected languages. It then is just a few mouse clicks to pass your order of the printed or ebook version of the book - in each of the 3450 language combinations.